To Award or Not To Award

When I went to school, there was no such animal. If you got straight As on your report card, your family might do something special, like take you out for ice cream, but that was about it.  The school provided the report card and it was there that their recognition stopped.

At our school, there are numerous awards given out, with exponentially greater numbers of students receiving each award.  There's the Beta Honor Roll awards that goes to students who maintain a B average.  And the Alpha Honor Roll awards for A average students.  The Principal's Awards go to straight A students who maintain an outstanding behavior record for the entire year.  That to me is an accomplishment worth recognizing, although I worry about the recipients of those awards, too.

Then there are the citizenship awards for other students who maintain outstanding behavior throughout the year (but without the straight As).  There are awards for perfect attendance and for being on the pep squad.  Two students from each French immersion class received awards (overall French grade and most improved), while a number of non-immersion students also received French awards for their progress in learning the language.  There are art and music awards, and an overall band award.  Finally, each teacher is permitted to select one student for their "Husky Paw" award, to recognize someone who may not particularly shine academically or otherwise fit in one of the categories.

Despite all of these awards, there are always a few students - merely a handful - who receive no awards at all.  My heart breaks for them.

I understand that the school wants to reward effort and to motivate students who have ability but just haven't made it to the next level.  But to me, the awards process singles out these remaining students and imprints them with failure.

That said, the awards program was kind to Dylan this year.  In first grade, at our first awards program, both of us went into it having no idea what to expect.  They gave out the awards in a little different order that year and Dylan sat there watching student after student get up to receive an award.  By the time he finally did receive one, my emotional guy was in tears.

This year, Dylan earned an award within the first few minutes, recognizing his B average.  He went on to get a medal for citizenship and a certificate for his participation in chorus.  But the most exciting moment came when he received a Husky Paw reward from the music teacher, recognizing his enthusiasm in music.  It was a very special moment for him...and for me! 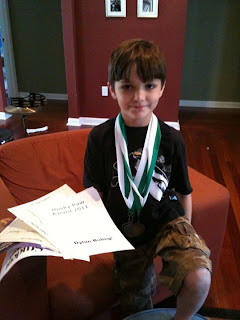 For Dylan, it works.  As the kid who will never be the brightest or the fastest, he needs recognition to keep him going.  And so far, he's not content, saying for the third year in a row that he wants to "win" the Principal's Award.  And therein lies the rub: teaching him that these awards are solely a reflection of the work he puts in, and not a competition or popularity contest.
Posted by HynesMom at 10:10 PM