If you don't know, today was Lemonade Day. Although their website does not immediately make it clear, it's a nationwide day for kids to try their hand at setting up a lemonade stand.  One of the main sponsors is Junior Achievement and the materials you pick up talk about finding an investor, purchasing supplies, setting goals, advertising, location, etc.  It's really a great concept.

Too bad we've been too busy to prepare. I registered Dylan before he even knew about it, and had RockStar pick up the materials. But then I didn't want to get Dylan wound up before bed so I didn't bring it up at night.  And we were somehow always busy during the day. Or I'd plan to tell him but I'd forget. And before I knew it, it was here.

We did speak a little about it on the way to school on Friday and looked over the materials before Cub Scouts on Friday night. I tried to get him to think about goals and location. But he was mostly interested in what to call it. He decided on Lemons into Lemonade, which I'll admit is pretty clever.

I'll admit that the lemonade stand could have stood with a little more planning.  The "stand" ended up being two flimsy card board boxes, one on top of the other.  Dylan desperately wanted to make lemonade from scratch, but I finally convinced him that we didn't have the time this go round.  With having to run around and get supplies, the stand didn't even open until about noon.

Our location plans also didn't go as planned. Had we planned earlier, I would've suggested that he set up in City Park, but I came up with the local library as a good alternate for foot traffic.  Only problem:  as a government entity, they were not allowed to participate in any kind of solicitation.  (I wonder if we had asked earlier and gone up the chain of command, perhaps it could have been arranged.)  So we ended up in front of our house - not exactly a hotbed of traffic.

Despite the lack of traffic, the minimal planning, a wind issue that blew over and spilled one of the pitchers, and even a minor but blown-out-of-proportion incident with a red ant, I'd say that Dylan's first lemonade stand was a success. After paying me back for my investment of $9.00, Dylan cleared a whopping $2.00!  Not enough to buy the Wii he wants to much, but a profit nonetheless, and he was happy about it, which really is the main indicator of success.

I hope that he will do it again next year and that together we'll be able to do a little more planning.  But for now, he's savoring the success of his first business venture. 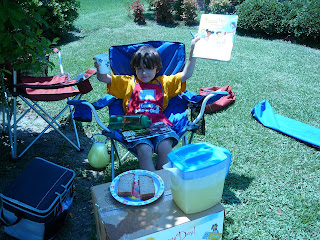