I was already set up to be proud today.  As Dylan's Cub Scout den leader, I knew he would earn his bear patch tonight, along with a series of activity belt loops. He had worked hard to earn the patch, although it's definitely easier when your mom is the den leader.  So I thought I was prepared for the evening's dose of pride. 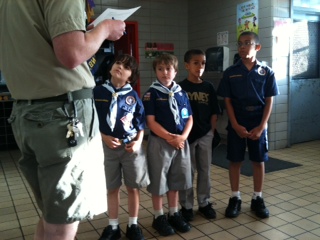 I picked him up at after-care and we were ready to run off and grab a quick bite before the pack meeting.  Then he ran inside because he forgot "something."  That "something" ended up being a yard sign.  A "student of the month" yard sign! 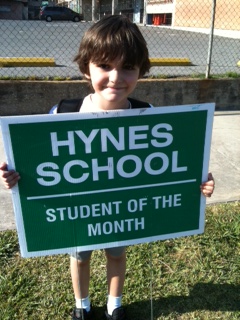 I've seen these signs around the neighborhood and honestly, I wasn't sure Dylan would ever get one.  I don't even know all that goes into becoming a student of the month.  I thought it was grades, but the recorded voice mail from school suggested that it was more about the school's core values - the "Husky High Five."  While I can't rattle off those core values, I know that it consists of things like being cooperative, being safe, and being helpful.  And while he might argue me to death, he does love to be helpful.

I'll also admit that I wondered if maybe he was "due."  He told me that every class has a student of the month each month.  Since he has a small class, I thought maybe they had just run through the rest of the class, and it was his turn.  But nope!  According to Dylan, another student - a very bright, all-As kind of kid - has never been student of the month in all of the four years they have been at the school.