Can we get a RedBox?

Can we eat at McDonald's?

Can you download this ap/get this Lego(tm)/buy me a snowball?

The requests are pretty relentless and I am not typically an "easy" mom. I don't just buy stuff because I'm asked, although if there's a good reason for it (like, it's 98 degrees and the request is for a snowball) there's a possibility that I'll go for it.

The problem has become that even little expenses are hurting our budget. 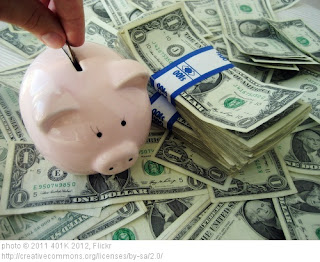 Much as I hate to admit it, we are living above our means. This is not to say that we are taking fabulous vacations, buying designer clothes, and installing a swimming pool.  I only wish it were that easy.

How do I explain budgeting to a 10-year old when I'm not even sure that we parents get it?


That said, I'm trying. When Dylan suggested he could live on selling lemonade (and keep in mind his own lemonade selling experience netted a profit of $2.50), I created an itemized budget for him. Rent, utilities, groceries, and other basic needs for a single guy. Then we talked about all the start-up and recurring costs he would have in his lemonade business. With what he would need to live on, his costs, and a target number of sold cups, he would have to sell the lemonade at $3.00 a cup - and that was for lemonade made from the flavored powder, not real lemons and sugar.

I also opened him an account at ThreeJars.com.  I forget where I read about it, but it's a Dave Ramsey site to teach kids about money.  I agreed to give him a $3.00 allowance in return for some chores, and I created some other tasks that can earn him bonus funds.  We'll see how it works.

The Three Jars refer to Save, Spend, Share. Although our own budget is mostly focused on spending at the moment, I long to get back to the save and share modes, too.

So after I helped Dylan learn about money...I started taking some of my own advice.

I've actually been working on this for a while. I tracked our expenses for a couple of months. Not pretty. I've now taken that and lowered our targets. So instead of spending $700 - $800 on groceries, we will now try to live on $600 of groceries. Sounds simple? It is until you try to keep the groceries to $125 per trip, with an extra $25 for stuff we run out of during the week, mostly perishables. 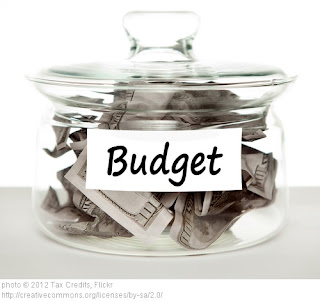 I've also cut back on some of our cell phone plans. Based on our usage, I think we can do it, although the overage fees are significant if we cannot. But I've learned how to check our usage and I've told RockStar he has to reign in his texting habit.

You do feel more in control by planning a good budget, although even with all the changes I've made there's still a bigger expense column than a salary column. And I don't see a lot of ways to make that change unless we take some drastic measures that I'm not all that keen about. Cut Dylan's Kung Fu classes? Not acceptable. Cut out internet entirely? Not realistic.

It's frustrating, as I've shared before. But since the alternatives are to get depressed or sell our house, I have to try. And maybe if we can get our finances in order, we can be an example to Dylan.  Even if he misses a RedBox or two.