Creativity with a dash of magic

I think the stereotype of a kid with ADHD is a boy running around wildly, maybe kicking holes in the wall, talking a mile a minute, and just too busy to sit and focus on anything.  It's not a picture of creativity.

We need to change this idea.

A recent study confirms what many parents have known all along.  Kids with ADHD may be a little harder to manage, but their creativity is off the charts.  I know this is true in our house.  Dylan is just about the most imaginative person I know.  A simple walk becomes a whole story line.  Last night he and I took our Siberian Husky, Nikki, for a walk and in no time, I was Dylan's horse Goldie (fortunately without him on my back) and we were traveling through the desert.  I answered in what I hoped was my best impression of Mr. Ed.  Not that he has any idea who Mr. Ed is.

Today we participated in the Scout Parade.  The theme was magic, so Dylan was, of course, Harry Potter.  Okay, so maybe that's not the most imaginative costume, but he was completely in character, yelling out "Expelliarmus" and riding his Firebolt broomstick. 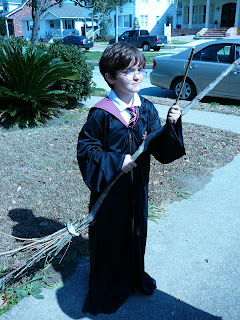 I think the hardest part is that these kids often have a hard time translating their imagination into something that fits into academics.  Education today does not leave a lot of room for self-expression.  There is a huge focus on being able to complete a test and if you are good at that, you are considered smart.  If you are not good at that, well, your intelligence is not, unfortunately, valued as highly.

I don't blame teachers or even the educational system.  Schools are continually being asked to do more with less.  How do you create a meaningful educational environment with more kids, but a smaller budget; more requirements, but less time?  We need creative ideas, but we don't value them.

There's a huge comparison going on between the U.S. and China.  China's education system values tests and getting the right answers.  And despite the fact that our history is built on imagination and thinking outside the box, American education is leaning toward that rote, only-one-answer-is-right kind of thinking.  We are being short-sighted.  We needed more than right answers to dream up the idea of going to the moon.

On my best days, I know that Dylan will do fine.  While his grades are all over the map, he enjoys school.  He thinks science is just about the coolest thing ever.  He likes to read, even though he still doesn't choose to do it on his own.  I don't know if his grades will ever reflect his ability (although I hope so!), but so long as he keeps that spark, that interest in the world, that belief in magic and imagination, he'll do just fine.
Posted by HynesMom at 3:16 PM