Something I haven't talked about much here but is intimately connected with me is my sheer, unadulterated love of dogs.

I have loved dogs for as long as I can remember. When I was growing up, our next-door neighbor had a super mean German Shepherd who would come running up to the fence growling and snarling.

As soon as I could walk, I would go right up to him and scare my mother half to death in the process.

As I set out on an independent, post-college life, I got a dog and a van and traveled cross country (more on that some other day).

Within six months of getting together, RockStar and I had adopted a Golden Retriever and our husky arrived less than a year later.

I am physically unable to avoid meeting dogs wherever I go. I joke that my mission in life is to meet every dog on the planet. I'm literally drawn to them like a magnet.

Which is why it is so incredibly disconcerting to have adopted a dog and to not be in love with her. 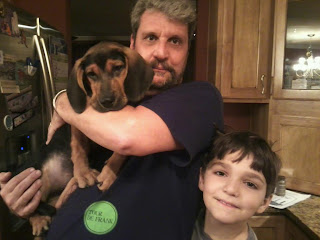 (along with RockStar and Dylan).

We adopted her two weeks ago. Best guess is that she is a bloodhound/basset hound mix. I want to love her.  But she bites and when you tell her no, she stands up to you and barks indignantly, like "Who are you to tell me what to do." We've been doing everything recommended, but nothing takes. She is as defiant as ever.

Keep in mind that I did NOT want a puppy. I like to adopt dogs who are a little bit older.  For one thing, everyone adopts the puppies. They don't last in the shelter! For another, when they are a little older, they've worked these puppy issues out.

Admittedly, it's more than that. This just isn't the type of breed mix I would have chosen. I like a BIG dog, the bigger the better. Although her feet suggest size, her little legs tell you that she will only ever get so big. I want a big lug to lean on me.

With everything we have going on here: a hyperactive kid who is failing and falling behind, a rock 'n' roll schedule to deal with, scouts, etc., a biting dog who wants to be Top Dog is so not what we need! I didn't pick her out (RockStar did) and while I was "consulted" it was not in a "let's talk about this, what kind of dog do we want" kind of way. It was a "here's a video, isn't she great, I'm in love with her, Dylan really wants a puppy" kind of way.

I feel like an idiot for going along with it all. But like so often, I do just go along...it's easier being Switzerland and not having too many opinions or being selective in the things I do have opinions on. Still, who do you think is coming home at lunch to let her out? Who took her to the shelter for her final puppy shots? Whose been calling breeders and trainers to ask about her wild ways?

I want to love her.  If she would just stop biting everyone and everything and - more importantly - trying to be the Alpha dog, maybe it would be okay. I have never abandoned a dog and I do not want to start now.