Farewell to a Princess 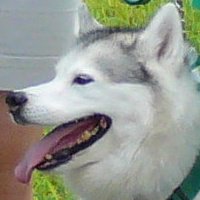 Although I normally write about my one Trouble Child, I have another... or I did until last night. This Trouble Child didn't keep me up with homework or talk back or refuse to take a bath.  Her special brand of trouble involved escaping and running through the streets of our neighborhood and digging her way through couches to escape thunderstorms.  Here is my remembrance of her.

It is with much sadness that I report the passing of Princess Nikita of the Great White North.  Nikki, as she was known to family, friends, and acquaintances, was an independent but loving spirit who never met a stranger, human or canine.  Rumors abounded about her early life as a princess in a Siberian ice palace, where she had countless servants meeting her every need.  How she went from a life of luxury to life on the streets, no one knows, but her family is grateful that she found her way to them.

She was employed throughout her New Orleans life in pest control, a job she undertook with great zest, instilling fear in the hearts of rodents, birds, and lizards everywhere.  In later years, she also did some acting, portraying Snowball, mascot of our local school.  In that role, she appeared at events such as the Husky Fun Run, the groundbreaking for the new school building facility, and the building dedication, an event attended by numerous local dignitaries. She reveled in the opportunity to meet her fans, but always shunned the paparazzi.

Nikki was also known for her singing, wailing melodies that were haunting yet beautiful.  In the last year of her life, she had largely given up singing although she still did occasionally say a few words in husky speak. Throughout her life, her family encouraged her vocalizations, often joining in with her, comforting her and making her family feel more like a pack.

She enjoyed late night forays to the Saturn Bar in the Bywater, where she would sit at the bar, drink martinis, and smoke cigarettes. In fact, she enjoyed independent forays anywhere, choosing to slip past unsuspecting guests as they entered the front door or dig out from her backyard to pursue adventures far and wide. Nothing was more fun to her than being chased by family member!

She leaves her loving parents and her boy, Dylan, whom she loved from the moment she met him, choosing to believe that her parents had brought him home especially for her. She joins her big brother Oakley, a gregarious golden retriever who preceded her in death five years ago. She will be missed by many and a certain window on our street will look lonely for the lack of a watchful husky.

Donations in her memory can be made to the Louisiana SPCA, where her family found her, or simply choose to adopt rather than buy. So many beautiful animals like Nikki need homes.  Until there are none, adopt one and make your house a home for a homeless dog…or a princess. 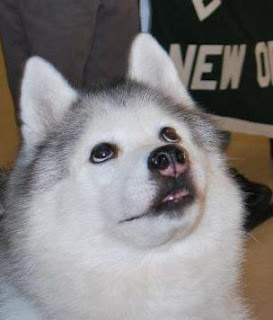