Life as a Lamborghini 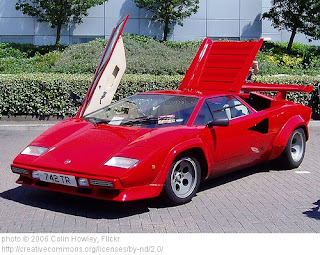 I was thinking about Dylan’s challenges with school and homework today, how frustrating it is for him, how difficult it is for him to get through his day, complete his school tasks, and take in and remember the information the teachers are trying to share with him. I’ve been trying to refocus my efforts with him to find a way to encourage him but build up his self-esteem at the same time. Help him to believe in himself, even when signs sometimes point to the contrary.

That’s when I suddenly realized what Dylan is.

He is a high-performance sports car, like a Lamborghini or a Ferrari.

Now, most people I know would love to have fine Italian sports car like that. I know I had a poster of a Lamborghini in my college dorm room. These are desirable cars.

But as desirable as they are, they are not ideal in all situations.

You see, Dylan as a Lamborghini is single-mindedly focused on getting to his destination. He wants to drive FAST; 120mph fast. He’s built for it and that speed will get him to his destination in no time. It’s not that he cannot focus, but that his focus is on ONE THING.

Unfortunately, his tasks are not focused on that same one thing. The goal is still to get “there,” but, in order to get there, he has to fulfill other tasks.

For starters, he has to make a whole bunch of deliveries. Lamborghinis don’t even have trunks, do they? So he’s got to stow the packages that need to be delivered in the passenger seat and even tie some to the roof. So right there, he’s slowed down, because a package on the roof wreaks havoc on aerodynamics. Plus he’s got to make all these stops! He doesn’t want to do it and he doesn’t really even get how to get all these packages on board efficiently. He might even lose one off the roof and have to turn back.

Then there are the passengers! He’s already got space problems thanks to the packages, but before he can get to his destination, there are people he needs to pick up and drop off. Where are they and how is he going to fit them in? He doesn’t even like some of them!

Did I mention that the roads are not all super-speed highways? Nope.  Some are city roads with plenty of stop signs and traffic signals.  Lamborghinis hate stop lights, haven’t you noticed? You can’t pick up any kind of speed if you have to stop every 4-6 blocks! Oh, and some of the roads are horrible. Way out of the way and bumpy, full of pot holes and speed bumps. Not ideal for something low-slung and meant for speed.

Given all that, it’s not a wonder that he gets grumpy sometimes!

During tonight’s meltdown (over social studies), I explained my theory. And he loved it! It made total sense to him, and helped him to see that while ADHD slows him down sometimes and makes some things difficult, it’s not necessarily a bad thing. Sports cars are great! But there’s a reason why there are so many Toyota Camrys on the road. It may not be flashy and it may not be able to go 120mph, but they will get you there in a reasonable time, you’ll get there safely, and you can take a bumps and stop lights a whole lot better. More kids and more adults are Camrys than Lamborghinis. But the Lamborghinis are special. You have to treat them well and take care of them, and they do end up in the shop more often than the old reliable Camry, but no one – NO ONE – ever put of a poster of a Camry on their dorm room wall.