The End of an Era

Unless you were hiding under a rock, you know that the last space shuttle lifted off into space today.


I still can't believe that's it.  That there will be no more shuttle lift offs and that there's no next-generation plan to replace the shuttle.  That we have been reduced to being taxi passengers on the spacecraft of other countries.  That we, as a country, seemingly are not as interested as innovation and exploration as we once were. 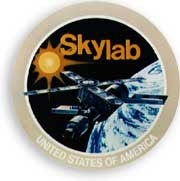 I grew up in the era of SkyLab, the first space station.  It was practically science fiction at the time, but I was captivated.  It might have helped that my mom was a rabid sci fi fan from way back.  One of the original Trekkies.  She brought me up to have a healthy respect for the possibilities of space and the importance of dreams.

Whether by osmosis or just natural selection, Dylan has been enamored with space since before he could talk.  I found an old paperback Little Golden book about space and astronauts at a used book sale when he was about 3 or 4 and he would have me read it over and over.  When his preschool class was invited to bring in their favorite book, that's the book he brought in.

At the time, his teacher told me that preschoolers were too young to understand space and recommended that we find another book.  While we switched it out for a book about trains (a lesser obsession), I knew his teacher was wrong about kids not understanding about space, at least as far as Dylan was concerned.  Somehow Dylan always knew and understood.

In second grade, his class published a book called Dream Big.  Each child in his class wrote about what they wanted to be when they grew up.  There were rock stars, football and soccer players, and teachers,  But Dylan chose scientist as his future career...a scientist who studies space.

So I can't help but feel saddened by the last shuttle launch.

I'm even sadder that the space program has been left adrift.

And heartbroken, wondering if my little scientist will even get the chance to one day live out his dream if space innovation and exploration are no longer valued in America.

Dreams are important.  Innovation is integral.  We need both to feed the imaginations and creativity of our youth, the same youth for whom we are cutting educational programs.  We need dreams and innovation to feed our very future.
Posted by HynesMom at 9:24 PM