The first tropical storm of the season blew through Florida last week. Tornados have wreaked havoc in Oklahoma and elsewhere. Then there have been the freak thunder storms, fires, and other catastrophes impacting other parts of the country. No matter where you are, it’s a good idea to think about what you would do if you had to evacuate. 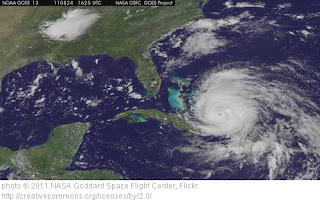 Here in the Gulf South, we are no strangers to evacuation. I hadn’t lived here a year before my first evacuation and Dylan was not quite 2 the first time we evacuated with him. Of course, I didn’t know about ADHD yet. While I’ve heard plenty of parents say that their ADHD kids have been fussy and grumpy since birth that was definitely not Dylan’s M.O. For his first evacuation (Hurricane Ivan), we spent a whopping 16 hours in two separate vehicles driving from New Orleans to Lafayette, LA. Keep in mind that a typical drive to Lafayette takes less than three hours, so, yes, this was a miserably long trip. Dylan slept through almost the whole thing and when he didn't sleep, he babbled to himself and watched what was going on outside the window.

We’ve evacuated a few other times as a family, most notably for Katrina. For that monster storm, we thankfully bugged out of town two days ahead of time, sparing us from the extremes of both danger and traffic.

Evacuating is not for the faint of heart but it’s the right thing to do. It’s always better to be safe than sorry. If catastrophe is heading your way and you can avoid it, I recommend it. You might lose some time and you’ll likely spend some money, but it’s better than losing your life or the life of a loved one.  Here are a few tips:

If you can, share driving duties so that someone will be awake enough to take on parenting duties when you arrive. For the Ivan evacuation, we were in two vehicles since we had two dogs and a child, and the camper top we had ordered for the truck hadn’t arrived in time. (The truth was that it had arrived in time – twice – but the company didn’t measure it right – both times.)

Finally, try to make it fun. You’ll be stressed and so will your child, but it can also be an adventure. Think outside the box – if you can afford it, maybe you can evacuate to a resort or at least a motel with a pool. Spend some time seeing the sights. Evacuating can be a pain and it can be a hassle. But if you’ve got to do it, you might as well enjoy at least some of it.